To accompany AAWR’s satellite exhibition LGBTQ Artists of Northeast Ohio, Kendal at Oberlin and the Artists Archives of the Western Reserve are pleased to present a Virtual Artist Talk. Join artists Mark Howard, Tom Roese, and Arnold Tunstall as they share their work, practice, and creative process. The illustrated lecture will be followed by live audience Q&A. 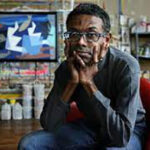 About Mark Howard: Cleveland artist Mark E. Howard was born in Newark, New Jersey in 1963. He received his Bachelor of Fine Arts degree from the Cleveland Institute of Art in 1986. Howard’s work has been included in many major museum exhibitions, including Cleveland Collects Contemporary Art (Fall, 1999) and the 1994 Invitational Exhibition, both at the Cleveland Museum of Art. His work has recently premiered internationally in the prestigious Biennale Internazionale Dell ‘Arte, held in Florence, Italy in December of 2001. Howard was also a featured artist in Urban Evidence: Contemporary Artists Reveal Cleveland, an exhibition coinciding with the city’s bicentennial with sites at the Cleveland Museum of Art, The Cleveland Center for Contemporary Art and Spaces Gallery. Howard’s paintings have also been featured in a two-person exhibition, Eye to I, with artist Anna Arnold, at the Akron Museum of Art in Akron, Ohio.  Howard has achieved recent prominence through his numerous large scale public art projects. In addition to his mural, Rocky River, commissioned for the dedication of the expanded Rocky River Middle School, the artist has completed a large-scale public mural and a garden bench project for the Cleveland School of the Arts, as well as a ceiling mural for the Louis B. Stokes wing of the Cleveland Public Library, where he was one of eleven regional and national artists chosen to produce art for the site.  Mark Howard completed his largest public art commission to date, a work commissioned by Continental Airlines for their new underground walkway at Cleveland Hopkins Airport. Titled Picket Fences, the work is laser cut from stainless steel, and backlit with LED lighting, spanning both sides of the approximately 650′ walkway. 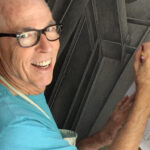 About Tom Roese: Tom Roese graduated the Cleveland Institute of Art in 1971. His paintings appeared in the Cleveland Museum of Art’s May Show every year from 1979-1989. He has shown in the Butler Institute of American Art’s National Mid-year exhibition in 1985 and 1994. Other exhibition venues for his work have included the Mansfield Fine Arts Center, Sandusky Cultural Arts Center, Southwest Arts Council, and the Great Northern Corporate Center. In 2000, he had solo shows at the Audrey and Harvey Feinberg Gallery in Cleveland Heights, Ohio and at the Ohio Arts League Gallery in Columbus, Ohio. In 2001, he showed with Bonnie Dolin at the Cleveland Playhouse Art Gallery. Roese taught drawing and painting for decades at the Cleveland Institute of Art and Parma City Schools where he served as a high school art teacher and department chair. In 1991, he was recognized as an outstanding classroom art teacher and was invited to participate in the AICA New York Summer Studio Program. In 2001, he became an Archived Artist at the Artists Archives of the Western Reserve. 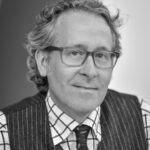 About Arnold Tunstall: Arnold Tunstall is currently Director, University Galleries at Myers School of Art, at the University of Akron. Previously, Tunstall worked for the Akron Art Museum in various curatorial positions since 1985 and served as the Collections Manager and Registrar from 1994 – 2016. Tunstall is active in the regional arts community on committees and boards of SPACES Gallery, Cleveland and The Akron Soul Train. He received his Bachelor’s of Fine Arts degree from The University of Akron majoring in Graphic Design and Photography. He received his Master’s of Fine Arts in Photography from Ohio University. He has been an adjunct instructor at the Myers School of Art since 1995 and is currently the interim coordinator of the Arts Administration graduate program at University of Akron.