What do you think of when you think of drag? For many, an image of a cisgender gay man comes to mind: an Ethel-Merman-type impersonator in a towering wig, lip-syncing show tunes amidst a maelstrom of kitsch and glitter. While the vision is not inaccurate, it’s not the whole story, and overlooks the contributions of whole communities of performers to a powerful artform that has evolved into multimillion-dollar creative industry.

On Tuesday, September 14th,  join the Artists Archives for Un(masc)ing Drag History with Dr. Lady J, a virtual program which reveals the foundational role of gender non-conforming people, trans people, and cisgender women in creating and advancing the art of drag. During this hour-long presentation, Dr. Lady J will explore over 150 years of US & UK drag history, including the rich legacy of BIPOC performers and the difficulties they faced in even the most progressive drag scenes.

Beginning with London’s Molly Houses in the 19th century, the program follows drag history through the gender blended landscape of the Cockettes, an acid-tripping, commune-based drag troupe from the 1960s that included adults, children, cisgender, trans performers, and even pre-fame Divine and Sylvester. Lady J will unpack these subcultures of drag, guiding the audience to today’s wide-open nightlife scenes where the gender of performers, and their characters, are nearly limitless.

For presenter Dr. Lady J, the history of drag is not only her life’s work; it is her lived experience. A non-binary trans woman who holds a doctorate from Case Western Reserve University, Lady J is “the world’s first drag queen with a PhD dissertation on drag history” and a respected performer on the national stage. As Lady J explains, “over the last decade or so, this history brought me closer to my actual self: from genderqueer-ish boy starting grad school, to non-binary trans kid…to a non-binary trans woman who won’t be defined by anyone but herself…. The people in this talk made space for people like me and other misfit weirdos to find our path in the drag world. The least I can say as a thank you is to try to bring these folks back into drag history where they belong.”

Un(masc)ing Drag History is proud to accompany CONVERGE, a massive exhibition of Ohio LGBTQ visual art held in partnership with the LGBT Center of Greater Cleveland, Lake Erie College, Judson Manor, and Cleveland MetroHealth. Shown across 5 venues, CONVERGE brings together the diverse stories of the LGBTQ community, including the historically underrepresented voices of women, transgender people, and people of color. Curated by Kelly Pontoni, with co-curators Sam Butler, Tony Williams, and Mark Yasenchack, with assistance by Mary Proctor, CONVERGE features 70 Ohio LGBTQ artists and over 140 works which explore themes of protest, pride, celebration, and transformation. 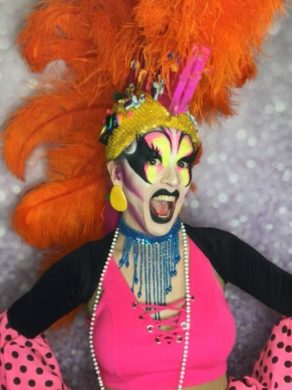 About the presenter: Originally hailing from just outside of Dollywood in rural  East Tennessee, Dr. Lady J is a non-binary trans woman who holds a doctorate in Musicology from Case Western Reserve University and is the world’s first drag queen with a PhD dissertation on drag history, a working drag queen whose research and educational outreach focus on obliterating the erasures of queer performance from history and bringing forward the contributions drag performers have made to politics, music, film, fashion, and popular culture. Her dissertation “From the Love Ball to RuPaul: The Mainstreaming of Drag in the 1990s” has now reached over 4000 downloads. Dr. Lady J now serves as the Director of Programming, Education & Outreach for Studio West 117, a new LGBTQ+ hub for the Greater Cleveland area.

Lady J’s career as a drag performer led her to become the first drag queen to perform representing the Rock and Roll Hall of Fame at Cleveland Pride in 2017, as well as the Drag Queen Coordinator and one of three selected drag performers for the Gay Games IX Opening Ceremonies, a selected entertainer for the Ohio Burlesque Festival for  2015, 2016, and 2017, and headlined at the 2018 and 2019 Austin International Drag Festivals. Before leaving the world of academia she even sat on the American Musicological Society National LGBTQ Study Group board for three years, and her review of Gillian Roger’s Just One of The Boys: Male Impersonation on the 19th-Century Stage will be published in the Journal of the American Musicological Society. For more information, visit Dr. Lady J’s website.