Saturday, April 9th kicks off our Studio Tour series as we get a behind-the-scenes glimpse of the artistic processes of the artists exhibiting in the Artist Archives’ show “Reinvention”. Reinvention documents the stories of five artists who reinvented themselves and their work in order to overcome limitations forced on them because of traumatic injury, aging or disease. The acceptance, adaptation and growth that each underwent as part of the crisis process resulted in the production of powerful, original bodies of work in divergent directions. 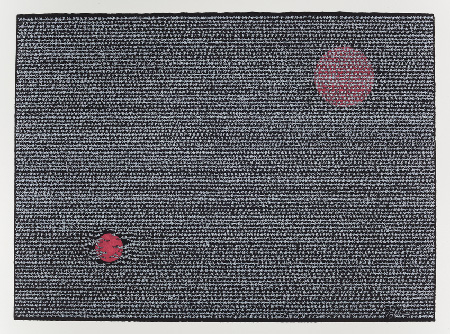 Terry Klausman worked in a variety of mediums early on, but it was after a welding accident injured his dominant hand that he picked up drawing again and developed what he is now most known for – his “stitch” or “barbed wire” drawings. Using his left hand, Terry began composing beautiful drawings using the manipulation of a repeated ticking mark that would eventually develop into its own language. Rows of ticking (resembling barbed wire) undulate across the page, sometimes pulled apart by an unknown force or curled as if blowing in a breeze.

Join us at Terry’s studio for an inside look at what inspires him, his found objects, steel sculptures and beautiful drawings.

Terry Klausman’s studio is located in Barberton, OH at the Art Center on Tusc. The address will be provided once a ticket is purchased. Call the Archives to purchase a ticket at 216-721-9020. Tickets: $10 AAWR Member, $20 Non Member.