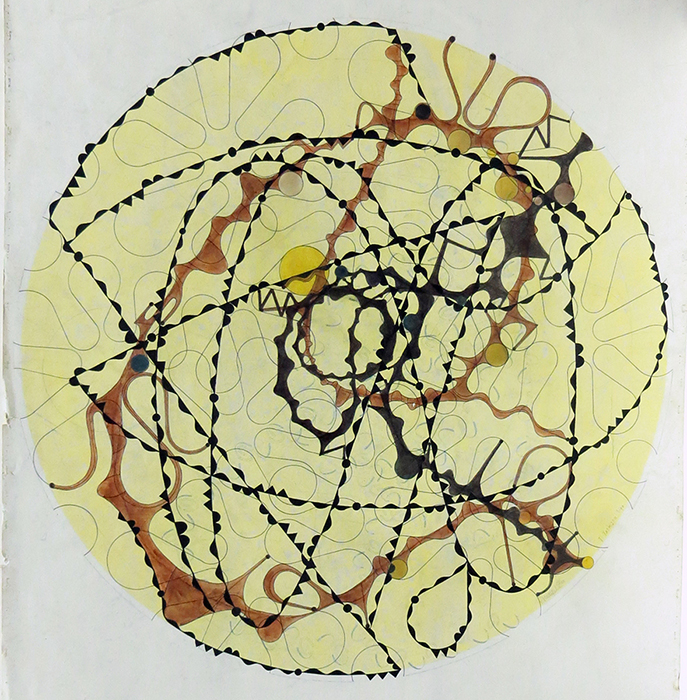 NewCelle formed as a group in the late 90’s with the purpose of “revitalizing drawing in the light of the new Millennium.” Lead by influential Op Artist Ed Mieczkowski what began as a communal experiment lasted over four years, producing work that developed “a new language of drawing” through the creation of a collective consciousness or as they called it, a “shared mind.”

From early in his career, Mieczkowski “extolled the virtues of artist groups as a viable way to generate ideas.” NewCelle was directly preceded by two Mieczkowski-lead collectives, Anonima, which played a prominent role in the emergence of Op Art in the mid 1960’s, and Drawing in the Community, which emerged from a class taught by Mieczkowski at the Cleveland Institute of Art.

Bea Mitchell, John Jackson and Achala Wali all began as Drawing participants, though ultimately both Jackson and Mieczkowski took issue with the group’s loose organization and its eclectic membership, many of whom, according to John, “were not visual artists.” Mieczkowski, Mitchell and Jackson broke away from Drawing in 1998 to create NewCelle, a group that while intellectually descended from its predecessors, was distinct in its philosophy and experimental methodology. Though Achala was not an original member of the group, she did eventually join the collective. NewCelle’s influence on her work and her stead-fast support cannot be understated.

NewCelle’s unique process was “informed by the science of chaos and complexity, emerging information about consciousness and [their] own spin on the surrealist practice termed psychic automatism.” Members would take turns working on a single surface, drawing continuous lines then passing the piece to their fellow-artist for the 2nd line to be laid and so forth. Each time the group met, a new piece was introduced until a full 9 works were in rotation.

NewCelle also chose to focus almost exclusively on the property of line. Jackson explained, “we decided that LINE, the singular domain of drawing, was our subject; and that other properties–color, texture and value–would assume minor roles, if any. A fifth property, shape, would be that which adheres to the line.”
Above all, NewCelle was governed by a paramount aesthetic principle- the entirety of the drawing had to remain within a circle, a barrier which is visible in the finished work as a thin graphite or ink ring keeping individual parts bound by the collective.

NewCelle met its end in 2001 when Mieczkowski left for the West coast to pursue his solo endeavors. The group dissolved under the weight of dispersant interests and what Jackson politely described as the pressures of a “provocative mix of dispositions.” A short time later, John Jackson’s own career met its tragic end when he was killed a 2006 double murder- a catastrophe that also took the life of photographer Masumi Hayashi and shook the Cleveland artistic community to its core.

Though NewCelle lasted only a few years, they produced both a singular body of work as well as enriched the lives and careers of its participants. As John put it, “[NewCelle] generated a phase shift in my own life and work as an artist” Or, in the words of Bea Mitchell, “I could tell a number of interesting stories that would reveal how I found, not only my own line, but my own voice.”

The exhibition, NewCelle +1 opened on May 18th, 2017 and will feature both the communal works of NewCelle, as well as singular works by each artist, including framed and unframed works on paper and sculpture by John Jackson. An Artists’ Reception will be held on Thursday, May 25th from 5:30-8:00pm. In celebration of this occasion, complimentary Mitchell’s Homemade Ice Cream is being served as the proprietors are relatives of Archived Artist Bea Mitchell.