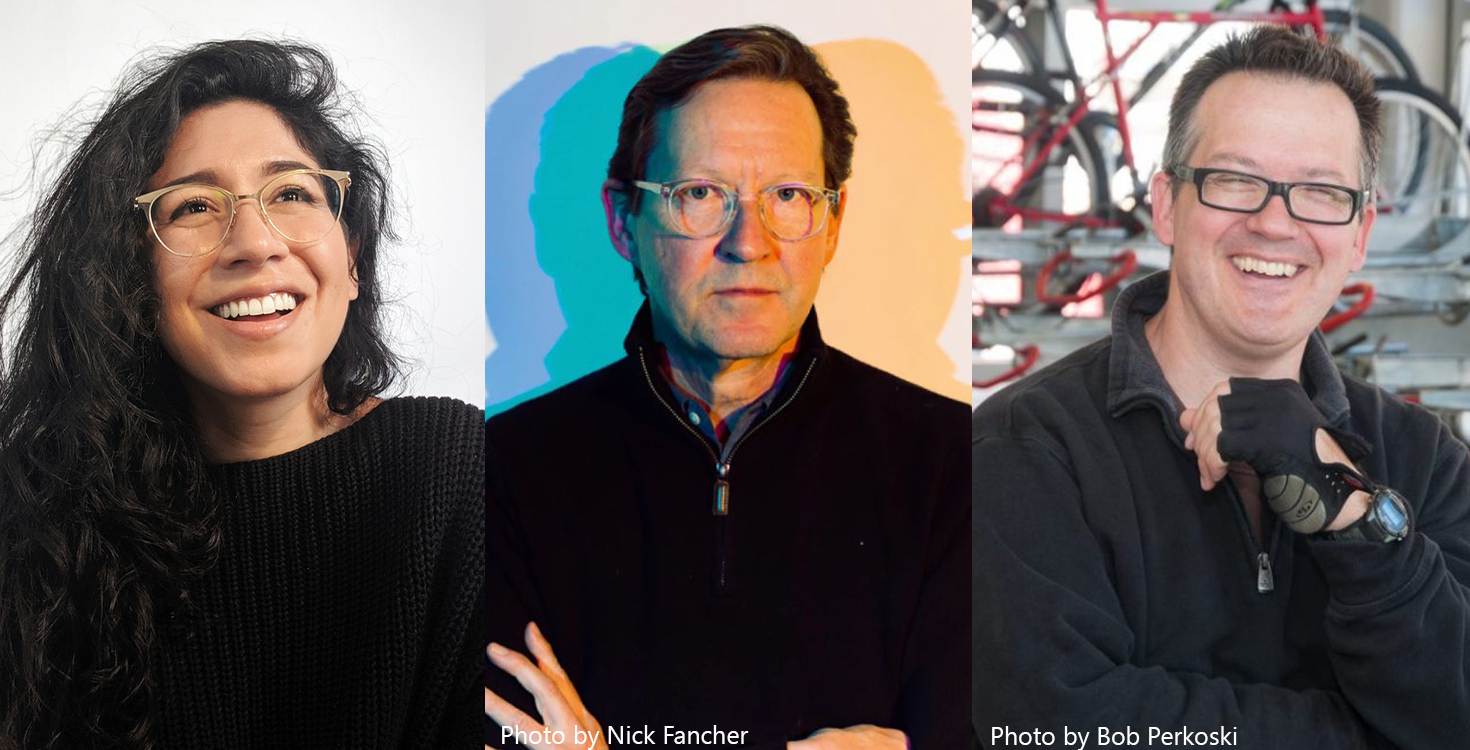 To attend the program, register on Eventbrite.

This summer, the region will be awash in art as the CAN Triennial and FRONT International make their long-awaited return. Cleveland alone will feature over 40 exhibitions, with some venues, such as the Cleveland Institute of Art and The Sculpture Center, hosting both events in neighboring galleries. This shared timeline and intimate proximity begs an important question: just how do the triennials relate to each other? And what is their relationship to the broader arts ecosystem of the region?

On Saturday, July 23rd, in partnership with moCa Cleveland, the Artists Archives will present CAN x FRONT, a discussion with Front Executive Director Fred Bidwell and CAN Executive Director Michael Gill which delves into the triennials’ strategies for benefiting the creative community, explores plans for the future, and investigates potential spaces of collaboration. The program will be moderated by Tizziana Baldenebro who will bring her unique experience as Executive Director of SPACES, a long time CAN collaborator, and FRONT Board member, to the candid conversation.

The CAN Triennial was conceived as a regional response to the globally minded FRONT International, a way for visitors to the region to see the breadth and depth of local art as they perused the blue-chip, international artists of the larger event. As Michael Gill described the “CAN Triennial began in conversations with artists and exhibitors of Northeast Ohio looking for ways to capture the energy that will come to Cleveland as part of FRONT.”

While initially some saw the Triennials as competitors, both have emerged from the pandemic with a renewed sense of vigor and commitment to collaboration with the local arts community, as well as with each other. This year, FRONT announced the inaugural Art Futures Fellowships program, which supports emerging Northeast Ohio-based visual artists of color, including Black, Latinx, Indigenous, and Asian American Pacific Islander artists. The Fellowships evolved from a discussion between Bidwell and Front Director of Artistic and Community Initiatives Deidre McPherson. As McPherson asked, “What can we do as FRONT to support Black and Brown artists?… FRONT is a convener of these museums we have. What can we do to bring about resources—relationships with museums, press, and curators, and how do we leverage these resources?”

CAN X FRONT with Michael Gill & Fred Bidwell will be held in-person in the Museum of Contemporary Art Cleveland’s atrium from 1:00 – 2:30pm. To attend the free event, register on Eventbrite.

About Tizziana Baldenebro: Tizziana Baldenebro is the executive director at SPACES in Cleveland, OH. An arts administrator, curator, writer, and critic, her practice focuses on emerging artists and designers, and is an organizer and activist in the effort to produce equitable cultural centers. Previously, she served as the 2019-2020 Ford Curatorial Fellow at the Museum of Contemporary Art Detroit and held a curatorial research internship at the Art Institute of Chicago within the Architecture & Design department. In 2018, she was awarded the inaugural Avery Review Essay Prize for her critical essay “Chicago Works? Curating Value and Representation in Chicago, Amanda Williams at the MCA”. She has also published articles in the New Art Examiner and the American Ceramic Circle Journal. She currently sits on the board of FRONT International, is an editor-at-large at The Avery Review, and is an ex officio member of the Cleveland Museum of Art Contemporary Art Society. She has served as a member of the steering committee for the Boston Mills Activation Project of the Conservancy of Cuyahoga Valley National Park, and was a 2021 curator-in-residence at Red Bull Arts Detroit. She has been invited to jury and critique works and exhibitions at the School of the Art Institute of Chicago, the Morgan Conservatory, the Stamps School of Art at the University of Michigan, and the University of Akron, among others. Tizziana received a Masters of Architecture from the School of the Art Institute of Chicago and a Bachelor of Arts degree in Anthropology from the University of Chicago.

About Fred Bidwell: Fred Bidwell (he/him) is the Executive Director of FRONT International, as well as a philanthropist, collector, and community leader. After a 35-year career as an advertising and marketing entrepreneur, in 2011 he and his wife established the Fred and Laura Ruth Bidwell Foundation. In 2013, the Bidwell Foundation opened Transformer Station, a contemporary art exhibition space on Cleveland’s West Side. Transformer Station alternates between acting as a venue for exhibitions curated by the Bidwells from their renowned collection of photo-based contemporary art and as a venue for exhibitions organized by the Cleveland Museum of Art. Fred Bidwell served twice as board president of the Akron Art Museum and is currently on the board of the Cleveland Museum of Art, on the Visiting Committee of the Allen Memorial Art Museum, and chairs the board of Assembly for the Arts.

About Michael Gill: Michael Gill (he/him) is founding executive director of Collective Arts Network, the nonprofit organization that produces CAN Triennial and publishes CAN Journal, its website, blog, and newsletter.  This role draws on the diverse skills of his varied, liberal-arts-informed career. Prior to CAN, he served as arts editor at both the Cleveland Free Times and Cleveland Scene. And prior to that, he was marketing director at Beck Center for the Arts. Michael has won multiple awards for arts feature writing in the Press Club of Cleveland’s state-wide Excellence in Journalism Awards, including Best in Ohio in the Reviews/Criticism category in 2022.  In 2019, the same organization named CAN Journal the “Best Magazine in Ohio,” which is a tribute to designer JoAnn Dickey and the multitude of artists, writers, and organizations that contribute to the magazine.  He has a BA in English from Hiram College and an MFA in Creative Writing from Eastern Washington University.