Our last week of our Studio Tour series gives us a behind-the-scenes glimpse of the artistic processes of the artists exhibiting in the Artist Archives’ show “Reinvention”. Reinvention documents the stories of five artists who reinvented themselves and their work in order to overcome limitations forced on them because of traumatic injury, aging or disease. The acceptance, adaptation and growth that each underwent as part of the crisis process resulted in the production of powerful, original bodies of work in divergent directions. 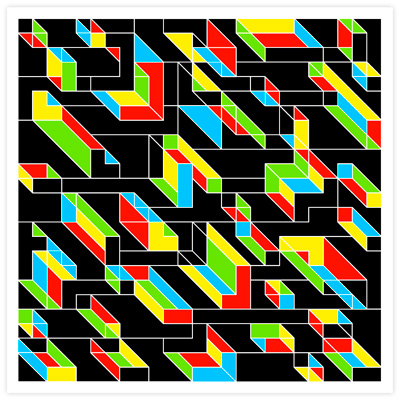 Pain and limitations due to a spine disease ended the architectural career of Andrew Reach, causing him to reinvent his creative output. He produces large scale digital works that would otherwise be too physically demanding to paint. When describing his sizable canvas prints he writes “Using color and geometric fragments akin to bits, I recombine them, in a visual dance of color, composition and optic play to imbue in them a kinetic sense of movement; a stand in for my ability to move freely through the world without pain”.

A tour of Andrew’s in-home studio will give us a look inside his digital world and his influences for shape and color.

Andrew’s studio is located in the Gordon Square District of Cleveland. The address will be provided once a ticket is purchased. Call the Archives to purchase a ticket at 216-721-9020. Tickets: $10 AAWR Member, $20 Non Member.