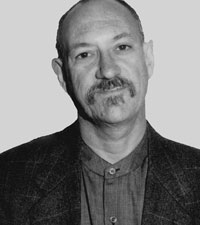 Wayne Draznin hailed from Chicago, Illinois. A creative film and photography artist who had a deep passion for technology, Draznin worked many years in industrial jobs before attending art school. For twelve years he worked as a spot welder for Ford in Chicago, a place he believed exposed him to toxins that led to his later illness. However, he did obtain an art education eventually, earning his BA degree from Columbia College in Chicago and his MFA degree from the University of Illinois at Chicago. Draznin taught at the Cleveland Institute of Art and led the effort to integrate electronic media into the curriculum.

For him, no art was beneath consideration, and he attended anything and everything – performance art (which he frequently documented on video), experimental theater-sound art hybrids, and outdoor happenings.

Draznin exhibited work all over the United States, in Colombia and Brazil, and on the internet. He was also a noted writer, and his articles appeared in publications as diverse as Motorcyclist and Art in America. He frequently lectured on new media all over the country. In 1993, as public surveillance increased with no thought to personal privacy, Draznin began creating his “Surveillance Series”. The first piece in this series, The Weight, was an outdoor sculptural installation that was exhibited at The Sculpture Center in Cleveland, Ohio. This piece explored what Draznin describes as “data acquisition, fear, personal life, files, privacy, security, freedom…a maze of contradictory needs and desires” as it projected the image of a large eye from an over-sized surveillance camera onto an adjacent wall.

Wayne was a solitary man who lived by the lake in a community of other artists. In 1994 he was diagnosed with breast cancer. His last major work, a video documentation entitled Marked as AnOther (1996), is a view of breast cancer as personal story, epidemic, and emblem of sexism.