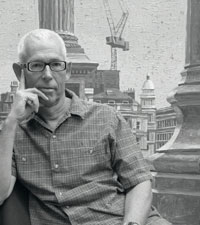 Since he graduated from the Cleveland Institute of Art in 1971, Thomas Roese has been busy making his career as an artist and an art educator. His paintings appeared in the Cleveland Museum of Art’s May Show every year from 1979-1989. He has shown in the Butler Institute of American Art’s National Mid-year exhibition in 1985 and 1994. Other exhibition venues for his work have included the Mansfield Fine Arts Center, Sandusky Cultural Arts Center, Southwest Arts Council, and the Great Northern Corporate Center. In 2000, he had solo shows at the Audrey and Harvey Feinberg Gallery in Cleveland Heights, Ohio and at the Ohio Arts League Gallery in Columbus, Ohio. In 2001, he showed with Bonnie Dolin at the Cleveland Playhouse Art Gallery.

As mentioned above, Roese is also an art educator. He has taught Drawing in the Continuing Education Department at the Cleveland Institute of Art since 1973. In addition, he is a high school art teacher and department chair since 1973. In 1991, he was recognized as an outstanding classroom art teacher and was invited to participate in the AICA New York Summer Studio Program.