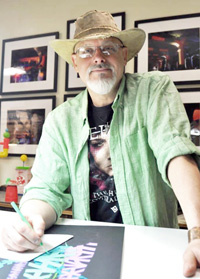 I have always loved to draw and feel the pencil in my fingers.  I developed my relationship with Prismacolor pencils in 2010. By the spring of 2011, my drawings had transitioned to hard edged abstracts.  They were unique in that the common techniques, such as shading, blending, and burnishing, were not utilized. I had become quite prolific in making these and people were taking notice.

Then came July 25, 2011.  I went to my job as a welder.  That morning I was building a very large steel frame.  I used a crane and a lifting clamp to lift into place large steel plates.  While lifting the last piece of steel, the clamp failed and allowed the steel plate to fall on my right hand, my drawing hand.  My middle, ring, and pinky fingers were smashed and my ring finger bone was sheared into two pieces. The fact that I was wearing heavy duty welding gloves is the only reason my fingers were not amputated.  So two surgeries (4 screws, 2 pins, and 1 plate) later I was left without the use of my right hand for the next 5 1/2 months. I found myself in a position where I could not draw and was feeling very sorry for myself – feeling that way for three days was enough.  I decided to figure out how to draw left handed. It would have been impossible to expect me to be able to draw the way I did right-handed. As an acknowledgement to this, I created a jagged line to serve as an outline around solidly colored shapes. There were 7 pieces in this series punctuated by my left- handed signature at the bottom left of each piece (without any forethought, I discovered my signature is virtually identical using either hand).  It was while I was drawing those pieces that I was inspired to make that jagged line, now evolved to a more symbolic looking line, the subject matter of the drawing.

By mid-January 2012, I had regained the use of my right hand.  I applied what I had learned from using my left hand to my right.  I then set forth on the exploration of my line. The first drawings were pattern fields.  These were typified by symmetrical, non repetitive, horizontal rows of my line in monochrome or polychrome.  People would refer to these as my “barbed wire” or “stitch” drawings. I was satisfied that the line on its own was working well and felt that it needed to be doing something more than just being in symmetrical rows.  The next series would have the line being pulled apart, ripped, restrained, and tied up. Geometric shapes made their way into the compositions. My work had developed movement and kinetic energy. Although I was very pleased that people identified my work by a name, Barbed Wire, I wanted to make the line softer and more flowing.  I was compelled to belie the sharpness of the line and its origins to make work that was fabric-like, even organic. There were no straight lines at this point, only curvilinear lines that were plant-like. They were seemingly windswept or intricately entangled in a thorny thicket. My work had now evolved into something that was the polar opposite of how it began

I look back on July 25, 2011 as the single most positive, important event in my career as an artist. Losing the use of my right hand opened the door to discovery.  It forced me to analyze my situation and adapt my art to what I still had to work with: my imagination, my talent, and my left hand.