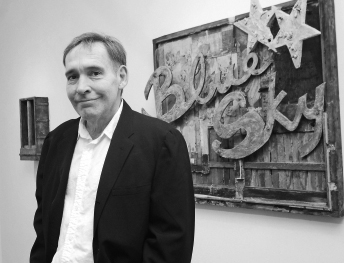 Durst grew up in Wadsworth, the only child of his mother, a legal secretary, and father, a printer for the Akron Beacon Journal. He identified as an artist early in life and spent a portion of his post high school years roaming the country from New York City to Pittsburgh to San Francisco, working odd jobs. In the early 1980s, at the age of 28, he enrolled at Kent State University to pursue a bachelor’s degree in art with an eye toward sculpture. Durst studied film under Richard Myers and was torn during college between sculpture and film. After graduation in 1987 he decided to focus on sculpture, “Ultimately, I decided I would have more control over sculpture. Making film was expensive and involved a lot of people” He credits Artist Robert Rauschenberg as an early influence, and Rock and Roll remains a life-long source of inspiration to him.

Durst was an integral part of the group of Kent State artists who subsequently made the Tremont neighborhood of Cleveland. a go-to arts destination in the 1980’s and 1990’s. The other artists that were part of his group of friends included Roy Bigler, Steven B &amp; Mother Dwarf, Beth Wolfe, Frank Green, Jeff Chiplis, Dave Madigan, Gee Sun Park, Dana Depew, and his former life partner, Dan Tranberg.

All of these Tremont artists worked in some way with found objects, and while Durst continues to use found objects in his constructions today, in his words his work has changed,” … from the ‘found’ art concept and moved more toward creativity: building pieces and tearing them apart, rebuilding it. I usually like to try to make the objects become something else, or at least integrate them into something else. I look for the pieces that have emotion. I will take emotion over skill every time..”

Archived Artist and writer Douglas Max Utter writes that Durst’s engages in “… making hybrid objects that are neither literal reminiscence nor simple abstraction, but a gritty mix of material and character, dancing to the background noise of memory. Terry Durst has always managed to keep things real, producing psychologically powerful paintings and sculptures that also explore shifting formal and thematic concerns. Since his 1987 graduation from Kent State University Durst’s strong sense of personal integrity and commitment to social issues has found expression in materials ranging from modular plastic forms to whole, home-baked cakes; even Fruitloops ™ (he used the cereal in one show to create colorful, crunchy portraits of political figures on a gallery floor) have found a place in his sometimes tongue-in-cheek visual/conceptual vocabulary.”