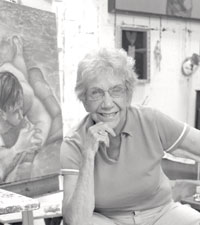 Shirly Aley Campbell (1925-2018) is a foundational Cleveland artist who utilized oil on canvas and her legendary draftsmanship to depict the human figure within its social context. Her art explores the complexity of the human condition, including bikers, drag queens, burlesque dancers, bull fighters, celebrities, and sex workers.

Throughout the years, her style has ranged from figurative expressionism in her early career to recent works of more painterly realism that incorporates collage and mixed media.

Campbell won the Agnes Gund Scholarship in 1947 for the Cleveland Institute of Art and continued her studies in New York at the Art Students League and Pratt Institute. She went on to become a beloved teacher of figure drawing and achieved the position of Associate Professor both at Cuyahoga Community College and the Cleveland Institute of Art. Campbell was also one of the original 9 artists who started the Artists Archives of the Western Reserve in 1996 along with founder David E. Davis.

During her career, Campbell won many awards including the coveted First Prize in the Cleveland Museum of Art’s May Show an astounding 3 years in row, from 1957 to 1959; she also was the recipient of the Cleveland Arts Prize in 1986 as well as the Outstanding Pace-Setter Award, 1985, Women’s City Club Foundation, Visual Arts Award, 1986. She also took on the title of Vice President of the New Organization of the Visual Arts (NOVA), Cleveland, OH in 1979.

Campbell has also been included in many publications, such as including Cleveland Magazine’s “Most Interesting People” list, the Best Seller List of 1995, The Art of Shirley Campbell by Elizabeth McClelland, and The Spirit of Cleveland: Visual Arts Recipients of the Cleveland Arts Prize by the Cleveland Institute of Art.