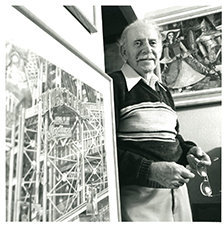 Pearl actively documented the people, architecture and flavor of life within the city of Cleveland and the surrounding counties of the Western Reserve for his entire life. He did so with an individual gestural style that was appealing for its color, animation and joie de vivre. He was a talented draftsman and by his own admission began drawing compulsively by the age of 5 or 6. As a professional artist he was included in 19 Cleveland Museum of Art May Shows, where he won several awards. He was also accepted into 15 National Mid-Year exhibitions at the Butler Institute of American Art where he also won awards.

He valued his education his whole life, both his own and education that he could impact on his many students over the course of a 30 year teaching career in the public school system of Cleveland. He believed teaching art could help students learn how to think creatively which would benefit them throughout their lives. I can imagine that he was a wonderful teacher as his former students still praise him. His teaching extended into his family and influenced all of his children, two of which became accomplished artists in their own right.