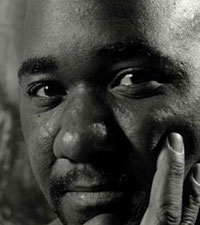 Michelangelo Lovelace, born in 1960, is one of the most expressive painters of life in Cleveland. He is a native of Cleveland, Ohio and has been a professional artist for 22 years. Lovelace began painting to pass the time away. In January of 1984, Lovelace enrolled in Cleveland Institute of Art where he worked hard at developing his artistic talent. In 1990, he moved into the Hodge Studio Artist Complex located in Cleveland. Reminiscent of folk art and outsider art, he paints with an animated and vibrant style. His paintings are visual documentations of life in many of America’s inner cities as they depict a realistic look living in a community where anything can happen at any time and where life can often be fast, poor, and short. His goal is to express the despair caused by the chasm between the promise and the reality of urban life in America for poor blacks and awaken the minds of people in our society. Lovelace continues to explore concerns of cultural, racial, and economic tensions between the haves and have not. These concepts are embodied in his “Urban Street Series” and also in his sculptural pieces. In his sculptures, Lovelace transforms Cleveland streets, such as 65th Street, into scenes which meld his memories and imagination with reality.

Lovelace created his “Rodney King Series” after travelling to Los Angeles in the spring of 1992. As an African American man, Lovelace wanted to express his feelings towards the unjust beating of Rodney King in March of 1991. Lovelace states, “My color combinations express black anger, black pride, and black unity.” The pieces in this series are mixed media on brick paneling, and often include newspaper headlines and photographs to convey an overall sense of rage.