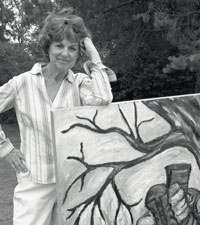 Margaret Arthur (b. 1936) is a native Cleveland artist known for her expressive work  in oil, acrylic, pastel, and collage. Arthur’s style has evolved radically over the years, reflecting both personal and societal experiences through a variety of form languages. As she describes, “Initially, I emulated the style of the Renaissance Masters. Slowly, as I longed for more creative freedom, the creative process and abstract elements became the focus of my work…. I rented a large studio at East 25th and Superior Avenue near downtown Cleveland, where I made big abstract expressionist oil paintings, some as large as 9 x 12 feet, inspired by the drama, richness or paint, colors, and compositions of artists like Philip Guston, Willem de Kooning, and Joan Mitchell whose works I had seen in New York.”

Later, a culturally cataclysmic event inspired Arthur to add additional layers to her work. “At the end of 2001, I began to incorporate narrative into my paintings,” she explains. “Telling stories was instilled in me at an early age, and after the fall of the Twin Towers on 9/11, I felt a sense of urgency to comment on man’s struggle in this complex world. I used symbols and objects such as shoes and army boots as metaphors for humanity, the war, life, death, hope, and yearning; and sometimes a raven, a symbol of foreboding from [Edgar Allan] Poe…”

Arthur obtained a Bachelor of Fine Arts from the Cleveland Institute of Art, and she went on to earn a Master of Fine Arts from Kent State University. Her career in education did not end there; Arthur was also an art instructor at Cuyahoga Community College from 1984 until 1998 and at Orange Art Center from 1995 until 1999.

She has also won various awards, such as a scholarship award from the Cleveland Institute of Art Extension School in Florence, Italy and a drawing award from the Jewish Community Center in Cleveland, Ohio. Arthur’s artworks can be found within the permanent private collection of Cuyahoga Community College, G & B Electric Company, and Rockcreek Aluminum Company.