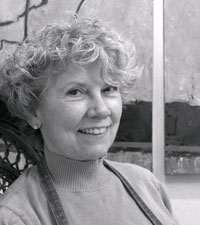 Lee Heinen (b. 1937) has been an ever-growing artist from New Jersey, who uses bold colors and simplified color fields to interpret the American experience, including portraiture, landscapes, and scenes of internal contemplation. She removes details from her portraits, creating an idealized, relatable, and timeless effect on the average person.

Heinen has been a lifelong student of art and art history. Heinen has studied at Douglass College in New Jersey, the Cleveland Institute of Art, and Ursuline College where she obtained her Bachelor of Arts. She then studied at the Instituto de Allende in San Miguel de Allende, Mexico, and with the famous German American artist Wolf Kahn in Maine. She continues to further her education and garner inspiration for her work through extensive travel all over the world.

Once while journeying through the foothills of France where she found herself painting in Provence, “It was this daily routine, living in a different culture, and complete immersion in painting which prompted my earliest experiments with Fauvist expressive color, thereafter, never to leave my painting” she recalled.

Not only has Heinen been a student of art, but she taught professionally from 1990 until 1995 at the Orange Community Art Center in Pepper Pike, Ohio. Heinen also has professional experience working at an interior design studio at Higbee Company in Cleveland, Ohio.

Heinen has also had her work featured in exhibits within the Butler Institute of American Art (1980, 2000, 2002, 2013), and she has been featured in solo shows like From Maine to Mexico in the Intown Club in Cleveland, Ohio (2004), and The Secret Life of Trees at the Collectors Gallery in Raleigh, North Carolina (2006).

Her work is displayed within a myriad of corporate and institutional collections, including numerous notable businesses being Bank of America in Wilmington, Delaware, B.F. Goodrich in Charleston, North Carolina, Cleveland Clinic, the Cleveland Browns, and Google in Dublin, Ireland.