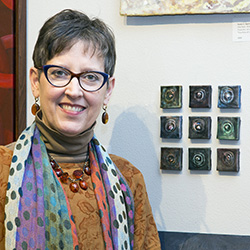 Kathy Skerritt is a Cleveland artist whose work has been exhibited in the United States and Canada and is held in private collections in the those countries as well as England, Norway, Sri Lanka and elsewhere overseas. Her work has been included in numerous group exhibits including the Grand Opening of the Crossroads Contemporary Gallery in Santa Fe and widely seen through forums such as the International ArtExpo in New York, Art Philadelphia, and High Point as well as through solo exhibitions locally and at the Coda Gallery in New York. She was a featured artist in the International Portfolio Project for the Colours of Freedom Foundation in Hamilton, Ontario in response to the 911 attacks on the United States.

A graduate of Carnegie-Mellon University with a BFA in painting, Skerritt creates abstract works that often highlight environmental patterns she has observed, including parallels between natural systems such as rivers and forests and the systems of the human body.  As she writes in her artist statement: “The body responds to the knowledge of its inward and outward congruence with the patterns of trees and streams and cellular shapes, watery pools, electrical circuitry, the entire abundance of appearances.  The hands respond by shaping surfaces that are simultaneously appearing to be biological, geological, anatomical, metallic, and/or fluid.”

Having traveled globally, Skerritt is deeply influenced by both what cultures have in common and what is unique to them. Her observational practices led her to develop an orientation she calls the radical gaze, which she defines as at-the-root perception that moves her beyond what is merely objective. This is a response to encounters with the person and art of the Transcendental Realism artist, Adi Da, whose work and writings have profoundly shaped Skerritts orientation to art and life, as well as her intention “to connect the viewer beyond the surface to the substance or process that underlies appearances, to approach a vision of that most fundamental Truth or source condition”.