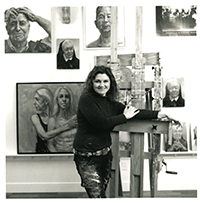 Judy Takács began her art career in 1986 with a Bachelor of Fine Arts from the Cleveland Institute of Art. The next 25 or so years included a successful career as a graphic designer and illustrator and raising her three teenage boys, together with her supportive and indulgent husband. Judy’s first art love has always been painting people. And this is what she now does each and every day at the beautiful and spacious studio at her home in Solon, Ohio.

A winner of seven Best in Show awards in the past few years alone, Judy Takacs has exhibited in solo, group and juried shows around Northeast Ohio, at the Zanesville Museum of Art and the Butler Institute of American Art. Her work has also appeared at the legendary Samagundi and National Arts Clubs in New York City. Her paintings have won awards from the Portrait Society of America and the Art Renewal Center. She has signature status at the Akron Society of Artists, at 50 is one of the youngest to be archived with legendary Cleveland artists at the Artist Archives of the Western Reserve and now holds a board position as Chair of New Media Relations on the Cecilia Beaux Forum of the Portrait Society of America.

In 2013, Judy was awarded an Ohio Arts Council Grant for Individual Artistic Excellence for her ongoing traveling painting project, Chicks with Balls. This larger than life portrait project which celebrates unsung female heroes, topless and holding balls to symbolize their strengths and struggles, was recently featured in the Portrait Society of America Members Journal. She blogs about this ongoing project and has published a book of the stories behind the paintings. This growing living collection of paintings will travel to Pennsylvania’s Luzerne County Community College in 2014 and then in 2015 to Cuyahoga Community College, Gallery East.