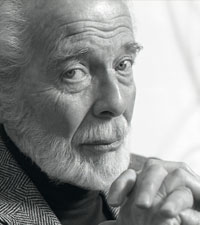 Clague’s sculptures have been exhibited in the Whitney Annual Exhibition of Contemporary American Sculpture and in twenty eight May Shows at the Cleveland Museum of Art. He is represented in the permanent collections of the CMA (six sculptures including his 1960 bronze Flower of Erebus and his 1963 Plexiglas Progression in Black and White), the Art Gallery of Ontario, the Aldrich Museum of Contemporary Art, the University of Massachusetts, and the Williams College Museum of Art. His work is documented in the Archives of American Art of the Smithsonian Institution in Washington, D.C., and represented in The Sculpture of the End of the 19th and the 20th Centuries (Éditions Rencontre, Paris, 1966/67). John Clague is best known for his monumental sculptures – bold, airy, and abstract forms in bronze, steel, and fiberglass. He used light to play with the surfaces of his sculptures, using black and white, multiple colors, and occasionally polished them to a shine.