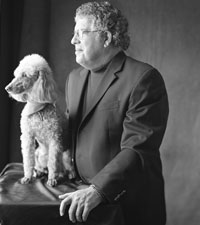 Herbert Ascherman Jr. has been a professional photographer since 1975, working mostly in black and white and exploring the rare art of platinum photography. Ascherman founded the Cleveland Photographic Workshop in 1977, which showcased over 1000 photographers in 165 continuous shows until its closing. In 2006 he founded the Cleveland Society of Alternative Photographers to promote the 19th century photographic processes still being used today. Herb believes that as an artist he is obligated to support the community he lives in, while simultaneously uplifting the human condition through his art. A teacher for over thirty years (including the Cleveland Institute of Art), Herb’s photography skills have been honed to a delicate focus.

In May of 2005 Ascherman was the only American photographer (out of 100 international photographers) invited to the prestigious Butterfly Art Foundation’s inaugural convocation (Thrissur, India) where he delivered the opening address and an afternoon seminar. He has since been awarded the coveted status of Fellow of the Butterfly Art Foundation for his work promoting international relations through photographic art.

Ascherman has published three books of portraiture, written dozens of articles and essay for national media, been seen on television and heard on National Public Radio. His 2000+ volume library of photography books serves as a resource and inspiration for his literary and photographic endeavors.

Ascherman has exhibited in twelve May Shows, the NEO show, as well as dozens of museums and galleries throughout the country. In addition, he has had one-man exhibitions in Paris, Tokyo, and India. Among his major artistic contributions to Cleveland history are his massive photo documentaries: 50 Faces: The Holocaust Remembered (1985), Religious Cleveland (1996), The Artists Project, and Cleveland, America.