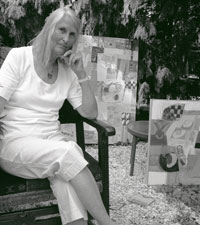 Local writer Elizabeth McClelland described Harriet Moore Ballard’s work for a catalogue accompanying an exhibition at the AAWR in 2002:

“Composed Fragments…well defines her art…her paintings evolve as she works, one part suggesting another until the composition is satisfied and she has met the challenge she devised. Earlier in her career, Ballard worked with the figure. Eventually the environment took over and that, quite naturally, led to interior scenes and still life paintings…Decorative plants, chairs, tables, vases and flowers are shaped by lines or solid colors. Their forms, somewhat distorted, arbitrarily situated, are composed with what is often a fine disregard for reality. Decorative and ornamental, bright, buoyant shards of objects, roughly drawn in shorthand configurations, are anchored by patches of color. Perspective is fanciful or non-existent. The room and its objects may tilt up and the outdoors and indoors often exist on one plane. Patches of patterned areas–stripes, checks, diam or circles or diagonals, are rendered distinctly and may indicate a wall, the floor, a tablecloth or other flat surface. All the motifs interact in a rational manner in an irrational ambience.”