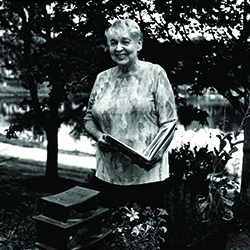 Elaine Albers Cohen has been involved with the Artists Archives of the Western Reserve since its beginning, and has recently become our 59th Archived Artist. Cohen graduated from the Cleveland Institute of Art and Case Western Reserve University where she received her degree in art education. She studied enameling with K. Bates, ceramics with Toshiko Takeazu and finished an independent study in ceramics at Baldwin-Wallace Collage creating large sculptural vessels. After graduation Cohen worked in the Lorain City School district as a high school art teacher for eleven years. Today she works in her studio in Avon Lake, Ohio. Cohen mainly works in painting, collage, ceramics and copper enameling. She describes her art: “Because of travel and the study of many cultures, my work reflects a wide variety of symbols and designs that often appear modern as well as ancient.”

Cohen has worked with many galleries and exhibited in numerous shows throughout Ohio, New Jersey, Pennsylvania, and New York, including the Cola Bjel Gallery, Boston Mills Art Show and William Ris Gallery in New Jersey.