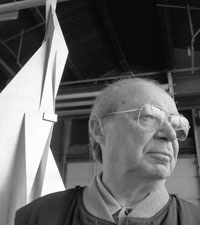 David E. Davis (1920-2002) was a painter and master abstract sculptor who worked primarily in steel, aluminum, bronze, wood, and marble. Nearly forty years of Davis’s life was spent creating a large oeuvre of sculpture distinguished by its innovation and exquisite craftsmanship. He has been described as a “high modernist…keeping faith with ideas of beauty, aesthetics, and timeless universal content”.

Davis attended L’Ecole des Beaux Arts in Paris, France for some time, but eventually obtained his Bachelor of Fine Arts from Cleveland Institute of Art. He then went on to complete his Master of Fine Arts degree at Case Western Reserve University.

The consistency of his artistic achievement is due partly to his ability to maintain control over the creative process and to adhere to specific philosophical principles, including respect for materials and technical mastery. Davis describes, “In a much broader sense, what has continued at the same level as before is my interest in abstract shapes and forms; my focus on universal rather than particular incidents or events; my emphasis continues to be on a search for excellence in execution; a search for symbolic rather than narrative content”.

From 1949 to 1961, Davis worked for American Greetings in Cleveland, OH, beginning as a staff artist and eventually leaving as Vice President of the Creative Department. In 1996, he founded the Sculpture Center and the Artist’s Archives of the Western Reserve, a unique archival facility and regional museum that preserves representative bodies of work created by Ohio visual artists. He dedicated much of his time to these institutions, and even had his own studio on the property located on the edge of Cleveland’s University Circle neighborhood.

He exhibited works at 12 May Shows in total from 1971 to 1990 at the Cleveland Museum of Art and had solo shows at the Akron Institute of Art (1972), the American Library in Bucharest, Romania (1976), and the Philharmonic Center for the Arts in Naples, Florida (1993).

His works can be found within the permanent collections of the Cleveland Museum of Art, The Israel Museum in Jerusalem, The Jewish Museum in New York, and private collections, such as Case Western Reserve University, the Cleveland Clinic Museum, Key Bank, and The Progressive Corporation.