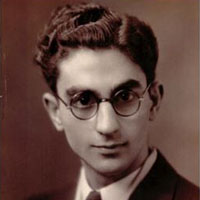 Anthony Eterovich was a master of both drawing and painting who, over the course of his 70 year career, created a vast body of work, spanning in style from the strictly observational to the magically realistic.

He studied at the Cleveland School of Art under a full scholarship in 1938, receiving a degree in portraiture, before continuing his education at Western Reserve University earning both a Bachelor of Science in Education and an Master of Arts in Art Education. From the years of 1948-1954, he continued to grow his talents through extended studies at both Ohio University and with the New York Art Students League.

Eterovich worked as a teacher in the Cleveland Public School System for over 40 years, as well as an adjunct professor for the Cleveland Institute of Art, teaching evening, weekend, and summer classes. His other career experiences include two years as a US Army Sergeant Tech Four during WWII where he was tasked with creating topographical maps and other detailed layouts of terrain. During this time, he also completed over 30 portraits of his fellow soldiers and officers.

Eterovich’s work could be described as a marriage between whimsy and reality, commonly known as magical realism. His mastery of both drawing and painting allowed him to take advantage of the unique qualities of each material he worked with to make pieces with a character specific to its medium. True to his observational roots, his works often highlighted the small moments of everyday life, personalizing these moments even further through the inclusion of landmarks specific to Cleveland. He would take these simple moments, typically rendered in stunning photorealism, and added the sense of magic to them through the use of bright colors and mythical and/or surreal iconography. During his career, Eterovich also experimented a great deal with abstract painting. One abstract oil painting he created, entitled The Merry Bench, even earning him national notoriety when it received a first prize purchase award in the Sixteenth Annual New Year’s Show at the Butler Institute for American Art.

This was just one of Eterovich’s numerous career awards and distinctions. At the age of 18, his work was featured in the Cleveland Museum of Art’s annual May Show, an honor he would go on to receive a total of 55 times throughout his career. His works would also go on to be featured numerous times in exhibitions through institutions such as the Canton Art Institute, the Butler Institute of American Art, Ohio University, Cleveland Institute of Art, Massillon Museum of Fine Arts, and the Artist Archives of the Western Reserve.